In 1963, Ricardo Bofill Levi gathered a multidisciplinary, multitalented group in order to confront the complexity of architectural practice, formed what is known today as the Ricardo Bofill Taller de Arquitectura (RBTA), now based in a former cement factory in the outskirts of Barcelona. 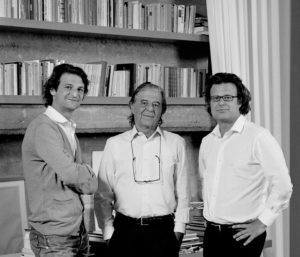 The professional progress of the RBTA, marked by the stimulus and the conception of life, the vital vision of an inexhaustible Ricardo Bofill, has undergone a series of practical and theoretical changes closely linked to the political and social transformations of recent years.

Interested in the urban planning problems of the developing countries, he has worked in major projects in Algeria and France with important constructions such as the Houari Boumédienne Agricultural Village in the south-eastern part of Algeria or Les Arcades du Lac and Le Viaduc in Versailles (France), among many others. He is also recognized for his contribution to the new “integrated urbanism” that include the schemes for Luxembourg’s Place de l’Europe, New Castellana in Madrid, Boston Central Artery; large infrastructures for public transport, as Terminal 1 for Barcelona Airport; sports, cultural, and retail facilities in Europe and Asia; both social and Class A residential buildings, from Dakar to Stockholm, from Beijing to Paris; office buildings and headquarters of leading companies in the US, France, or Spain…More info about Ricardo Bofill Levi

The international reputation of RBTA is due to his continuous and successful working in many countries, which highlights his capacity for creating harmonious projects always linked to local cultures and global experience.

He is a legendary architect, a Master; he is our tutor, our mentor and, above all, our father. We love to mix the experience of the old experts guard with the fresh and new trends of the dynamic and radical young talents in terms of design.